Rider of the Week, John Bennett!

Rider of the Week, John Bennett! 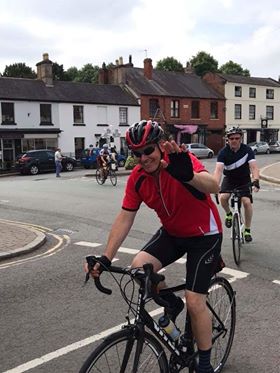 Why do you ride.
For fitness, to see countryside, go new places, good company.
I got back into cycling six years ago but that’s not the full story. I started work at 16 and saved for a new bike I brought a “10 speed Racer” all steel I did rides out to Shropshire with my brother then a week’s tour taking in the peak District the lake District and Yorkshire I was hooked on cycle touring.

Two years on I was on bike number 3 based on a 531 Carlton frame it had campang gears and hubs, cinelli bars and rims made for a tandem, it was made to be bullet proof, it needed to be. The following 3 years I over 30,000 miles. I covered this by doing long Sunday rides, some starting from shire oak, I did cycling holidays, Saturday rides over the chase with my brother, evening summer rides to the railway at shenstone with my dad, and gradually longer reliability rides and then longer audax rides, and the occasional youth hostel weekend.

Anyway that was thirty odd years ago. 8 years ago I was doing zero miles and putting on weight I decided the best way to get fit was to start cycling again. I did a bit of off road with WWMI then I started cycling the 7 miles back from work along the canal, not a lot but a start.

What do you like about cycling
Over the years I have had some good times, nice rides nice routes, you see more on a bike than in a car and you can get to more places. Good company and great mates, all this and you don’t realise you are getting fit and burning up fat. A bike is also a simple thing it can easily be worked on.

What do you dislike about cycling.
Riding in the rain, and cyclists that have a chip on there shoulder because they have spent loads on a bike and some sky kit.

What is your favourite bike.

Omg what a question I have old new road and off road. So deffo road the bullet proof Carlton lives on well the frame does the original wheels were still going until they were attacked by a Citroen c3. My original race bike a knight is still going but had to be completely rebuilt, it’s first outing was to shenstone as my dad had it last he would have loved that. As for new bikes I have a vitus winter road bike, this has been a test bed for me so I know what geometry gearing tyres etc suits me, the bike is a wiggle / chain reaction own brand these aluminium frames bikes with carbon forks cost about £450 and are perfectly fine for rides like the SOCC tranquilo, this is why l would advise any newcomer to cycling to follow this route, and like me when you upgrade it becomes your winter bike. Anyway you can always tell me on a Sunday ride I am the one with mudguards in the summer.

What is your favourite drink at the café
Tea for me old school.

What is the toughest hill
In my cycling past I did lots of hills and passes, Rosedale chimney was a tough one, and the devil’s staircase which was part of an audax 300k, however the honour for the toughest ride was the 600k I did in 1987 Windsor Chester Windsor, well more like kiddiminster Beaconsfield kiddy Warrington kiddy. I almost packed 15 miles from the northern most point Warrington and then couldn’t find the control, I ended up asking a woman on a shopper bike complete with front basket, but she knew were it was, again cyclists look after one another. Anyway I arrived 15 minutes before the control closed, had some cold rice pudding got the brevit card stamped and headed back to kiddy.

My bucket list.
The bullet proof bike was built for a LEJOG which I never did so unfinished business but I might need to retire first to find the time.

Music to listen to while climbing
I don’t really do music on the bike but if I did it would need to be something with a good beat.

Well he said a Beat, so here is the Beat.